About blueberries in Gunma prefecture 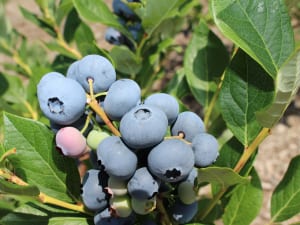 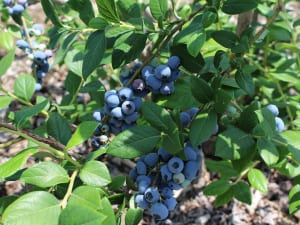 The northern region of Gunma, located at a high altitude, is where blueberries are grown. There’s a significant difference in temperature during the day and night, which assists in the growth of sweet blueberries here.

Ohtsubu Hoshi:
This blueberry variety was developed in Gunma. Distinguished by its large size, this juicy berry has a firm texture and refreshing, tangy taste.

Amatsubu Hoshi:
Another variety originally from Gunma, this large berry is known for its moderate firmness and elegant sweetness.

Many kinds of fruit are in-season in early summer, but surprisingly, the harvest period for blueberries in Japan is not well known. The domestic blueberry production is not very large, at slightly more than 1,000 tons annually––this means most of the blueberries lining Japanese store shelves are imported from overseas.

These strawberries, including “Otsubuhoshi” and “Amatsubuhoshi,” are known for their large size. Coupled with their uniques names, these blueberries are gaining popularity at roadside rest stops and local fruit stands.

This time we visited with Hideyuki Kanai, the head of Numata City’s Blueberry Association. During our interview, which was conducted on his farm during the off season, Mr. Kanai spoke with enthusiasm about his blueberries.

Hideyuki Kanai We cultivate blueberries on our 5,000 hectare farm here in Numata City. We grow Gunma Prefecture original varieties including Otsubuhoshi, Amatsubuhoshi, and Hayabayahoshi. We also produce overseas varieties. By no means are domestic shipments large, but blueberries are a great fruit filled possibilities. In addition to eating them fresh just as they are, they can be used in juice, jam, and sweets. They are also used in dyed products and Japanese green tea. In particular, Gunma blueberries are large and delicious from the first bite. I’d like more people to enjoy them.

Of course, all of our blueberries are organic. We put our heart and soul into growing each and every blueberry. The timing of the harvest is especially important, and we make sure to pick the blueberries right after they ripen, when they are the most delicious. Only full-ripe blueberries, at the peak of their freshness and taste, are harvested by hand. It’s a lot of work, but we do not cut corners. Because of this, our blueberries don’t lose their flavor, even when frozen.

In September when the harvest is complete, we replant trees, scatter wood chips on the soil, and do other work to prepare for the winter. In the winter, we let the trees rest. In spring, we start tending to the trees again by trimming and pruning, so that the trees will bear lots of fruit.

June is a busy time of the year. We must put up nets to keep the birds away, and it’s also the start of the harvest season. Up until August, we welcome visitors wanting to pick their own blueberries, and we also carefully pack blueberries into boxes to send to local fruit stands.

After that, we even have to deal with beetles! In the summertime, we get invaded by beetles. They do a lot of damage. We go to all the trouble of putting up nets, only to have these bugs get tangled up in them and then bite their way through.

Mr. Kanai grows the “Otsubuhoshi,” “Amatsubuhoshi,” and “Hayabayahoshi” blueberry varieties with the utmost precision and care. Cultivated with assistance from the prefecture, these are varieties that are very special in Japan.

Hideyuki Kanai As their name in Japanese suggests, Otsubuhoshi are large in size, and something we are very proud of. Each blueberry is about two grams in weight and roughly the size of a 500 yen coin. Bite into one and you’ll instantly know how delicious it is.

Amatsuboshi blueberries are slightly smaller than the Otsubuhoshi variety, but are still a large blueberry that is packed with sweetness.
Hayabayahoshi blueberries can be harvested slightly earlier than the other two varieties mentioned above. If you try them eating one for yourself you’ll soon know their characteristics. But if I was to say one thing about them, more than any other variety, they have a very distinct and strong flavor. If you knead these blueberries into cake dough and bake it, and of course if you eat them just as they are, you’ll really be able to experience their taste and aroma.

One the challenges is how difficult these blueberries are to grow! The cultivation take a lot of work. It will take too long to explain in detail, so I’ll keep it short:

The branches of the tree often wither and die because they are sensitive to temperature changes. They are especially fragile in cold weather. When that happens, we need to prune the branches, and in some cases even have to replant the tree. So compared to other blueberry varieties they take a lot of time.

However, the size and sweetness of these blueberries makes them stands out from the rest. Despite the effort and energy required to grow them, I hope more people enjoy them.

On Mr. Kanai’s farm, visitors can start picking blueberries starting in June.
You mentioned that local kindergarten kids are invited to the farm when the season begins. If we visit your farm, how can we select the most delicious blueberries?

Hideyuki Kanai How to distinguish the delicious ones from the rest? It’s best to ask one of our employees. With that said, the flavor differs from the soil of each plant. There can even be different flavors on the same farm. In other words, it’s not easy to pick out the delicious berries.

But if I was to make a suggestion, and this probably sounds so obvious, but since you’ve made a special trip all the way here, pick blueberries that are fully ripe. Look for ones where the blue pigment covers the entire berry, right up to the mark showing where the flower used to be. These are the ones you should pick.

Other factors in determining optimum taste include the firmness of the berry’s flesh. With that in mind, it’s best to ask a staff member. If you visit our farm, of course, I’ll pick the sweetest and most delicious blueberries for you!

Blueberry season falls in the height of summer. Mr. Kanai’s face becomes visibly suntanned during this period. Whether freshly picked or sold at a fruit stand, Mr. Kanai’s berries are bursting with his passion and enthusiasm.

Hideyuki Kanai Though they taste delicious on their own, I’d really like people to try using them in cakes, desserts, and other foods, too. Your finished product will be a notch above the rest.

The blueberries sold at the local supermarket and other shops are mostly imported from overseas, but I think that Gunma blueberries are the most delicious. I’d like to create a new specialty product for the local area using these blueberries to spread the word. People can come to Gunma Prefecture and experience firsthand the taste of these real blueberries. 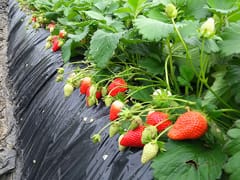 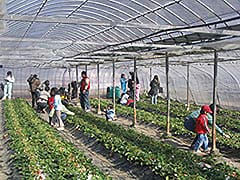 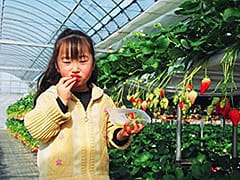 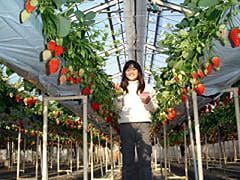 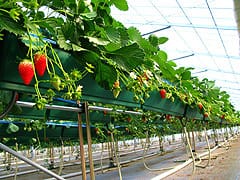 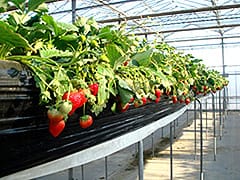 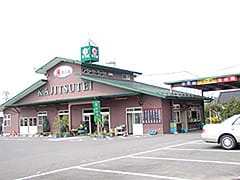