Harigi, Kochi – A Producer of Large and Delicious Niitaka Pears

When you think of fall fruits in Japan, pears come to mind. There are many kinds of pears called Asian pears being distributed in Japan. The reason why these pears are popular is due to their crisp texture and juiciness.
Especially popular varieties of Asian pears include the Kosui Asian pear, Niitaka pear, and Nijisseiki Asian pear.

The Birthplace of the Delicious Shingo Pear: Harigi, Kochi 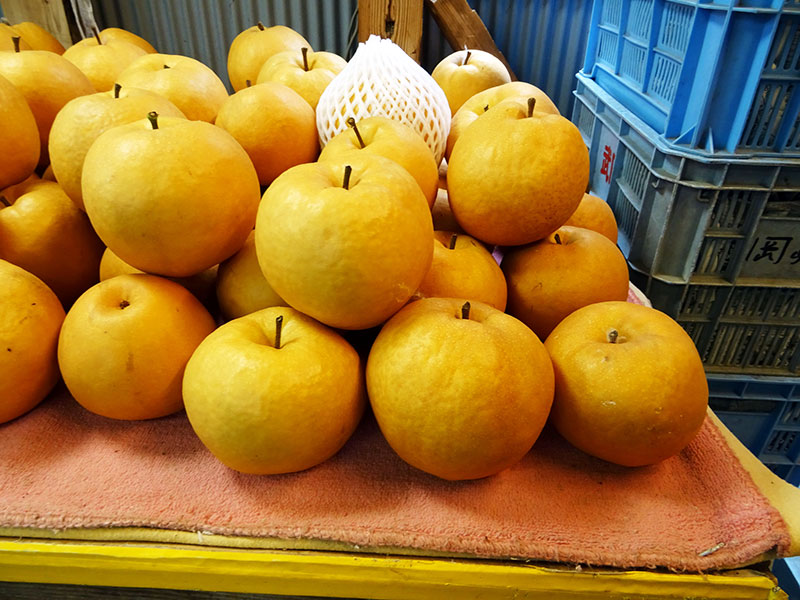 The Niitaka pear, a popular variety of Asian pears, originated in Kochi prefecture. Harigi, Kochi began cultivation in 1930 and is without a doubt the birthplace of the Niitaka Asian pear.

In this area, warm winds blow in the daytime from the Pacific Ocean while cool winds blow from the Niyodo River at night.

This difference in temperature is key to making the pears to grow deliciously. Alongside an increase in cultivation techniques that have been fostered for many years, Harigi has become the leading pear production area in Japan. 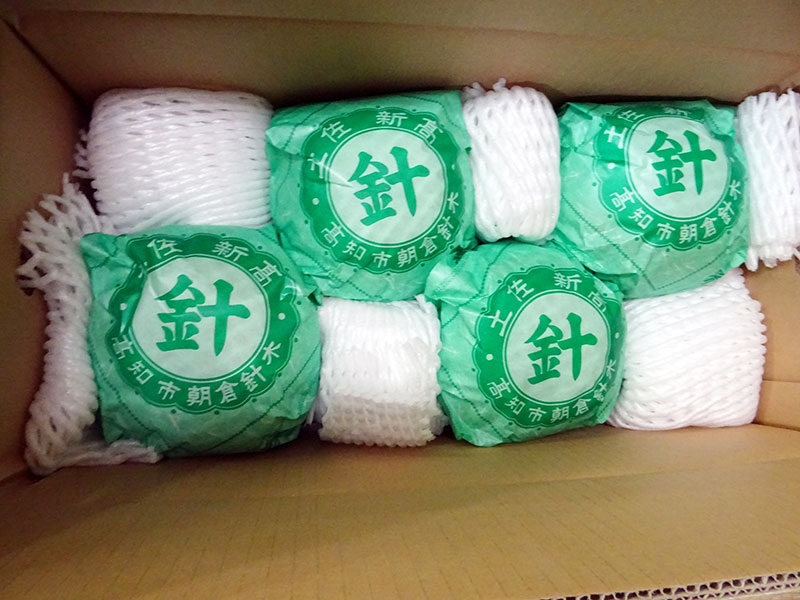 Though most are prone to believe that “if it’s large, then it lacks in taste,” it is said that the larger Harigi Niitaka Asian pears are, the more the natural flavor of the fruit is brought out.

The light, crispy texture and its strong sweetness is a lot like a juice. It is without a doubt a pear variety that has a deliciousness worthy of the name King of Pears.

Its main sales channel is to major department stores. Direct sales and repeat customers have also steadily increased and fans of Maruhari pears are spreading throughout the entire country. 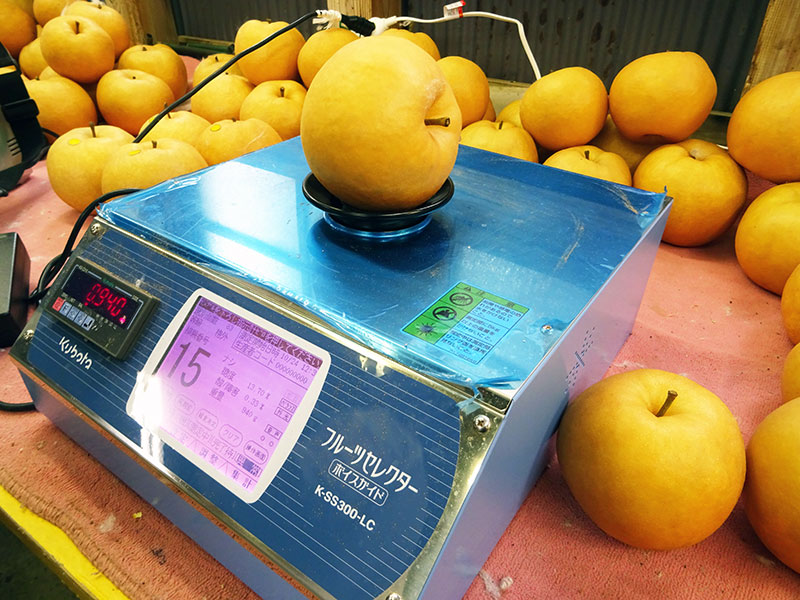 Strict standards are established for certifying Maruhari pears. The weight of one pear should be over one kilogram. Sugar content should be over 13%.

Sugar content is guaranteed by using the Fruit Selector developed by KUBOTA Corporation. Maruhari pears are shipped based on a numerically supported quality as a result of being able to measure acidity and weight of each fruit.

For a detailed explanation on the Fruit Selector, please refer to Fruits Selector: The Secret Behind Sweet Japanese Fruits.

Other references are also available. 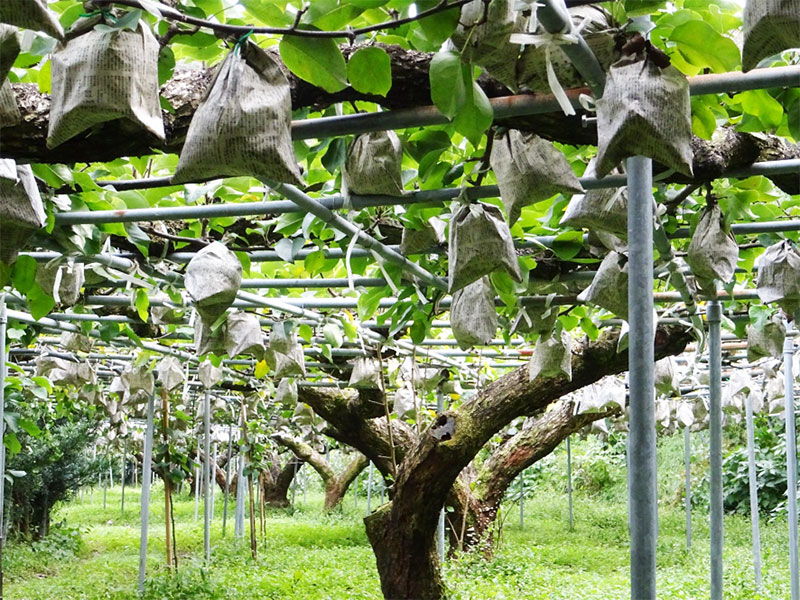 Maruhari pears cannot be certified if they are not fruits that have been harvested from trees over 20 years of age.

A final screening is thoroughly conducted by a “Niitaka Pear Master” who has over 20 years of experience in cultivation. The Niitaka Pear Master inspects the pears’ appearance, firmness, and other factors, resulting in only those that have passed the screening to be publicly sold as Maruhari pears.

How to Identify Delicious Pears

Try picking up a pear with your hands; those that have a moderate firmness are bound to be delicious. Another way to identify a delicious pear is the sound you hear from the fruit when you lightly tap it.

Pears that make an echoing sound are thought to be tightly packed with juices which is an indicator of a delicious pear. In contrast, we cannot recommend pears that make a light noise when tapping it as it indicates a possibility of the pear having lost its juices and being hollow inside.

A Message from the Producers 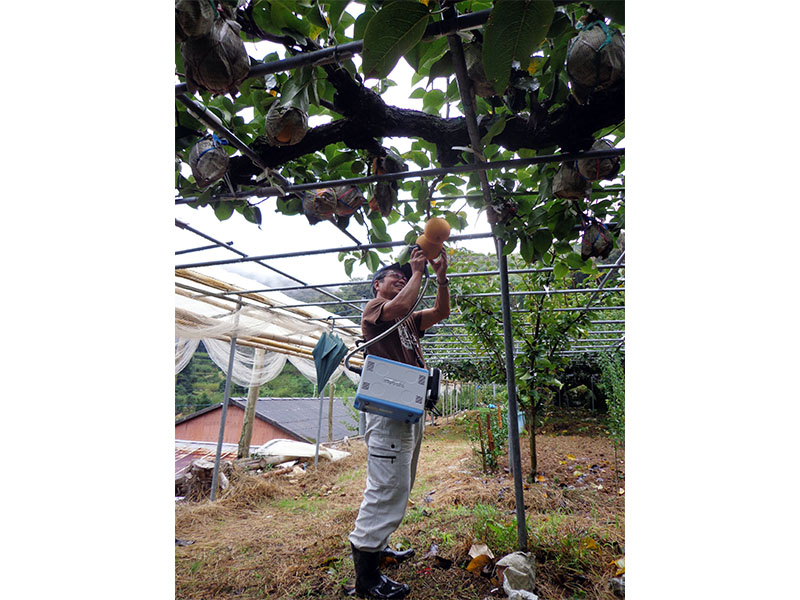 Harigi Niitaka Asian pears are traditional agricultural products that boast 100 years of history. By all mean, please come to Kochi to try these delicious pears that have accumulated trust and confidence over the years.

It goes without saying that we place time and effort into growing our pears to ensure its quality. Making full use of our machinery and techniques, we hope to deliver delicious Niitaka Asian pears with stable quality to all of our customers.

Harigi Niitaka pears are in season in October. We look forward to customers from Japan and all over the world coming to visit Harigi.